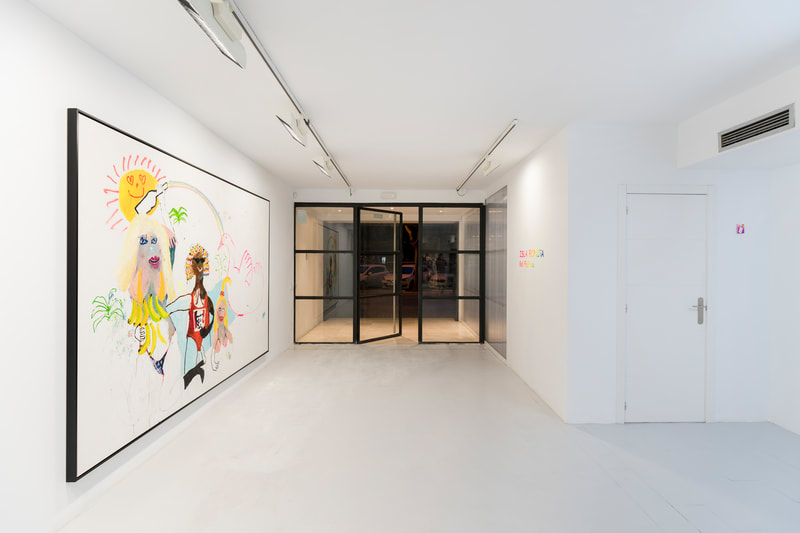 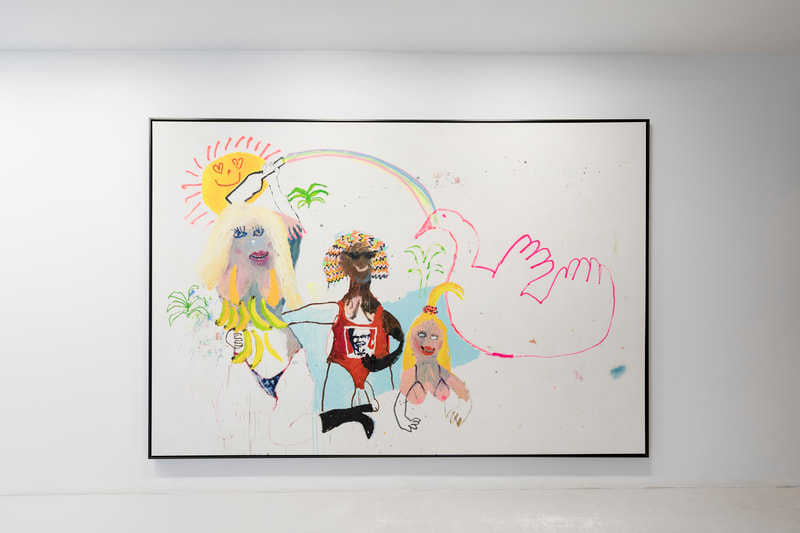 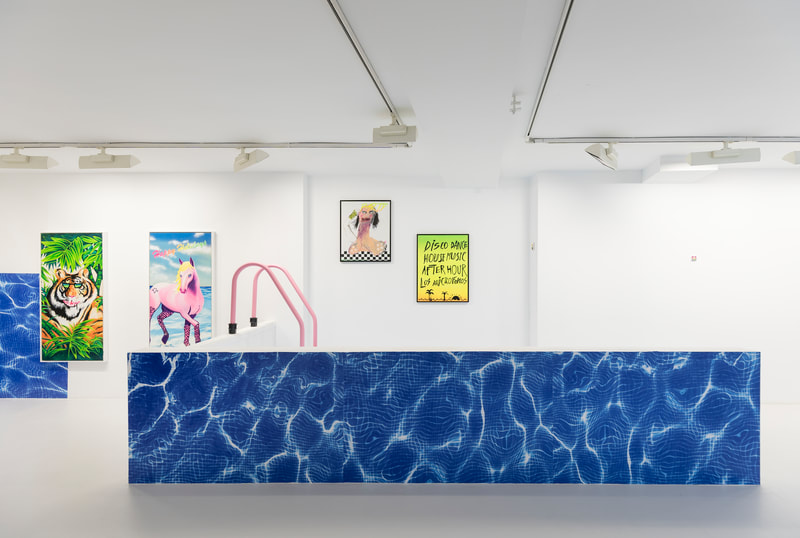 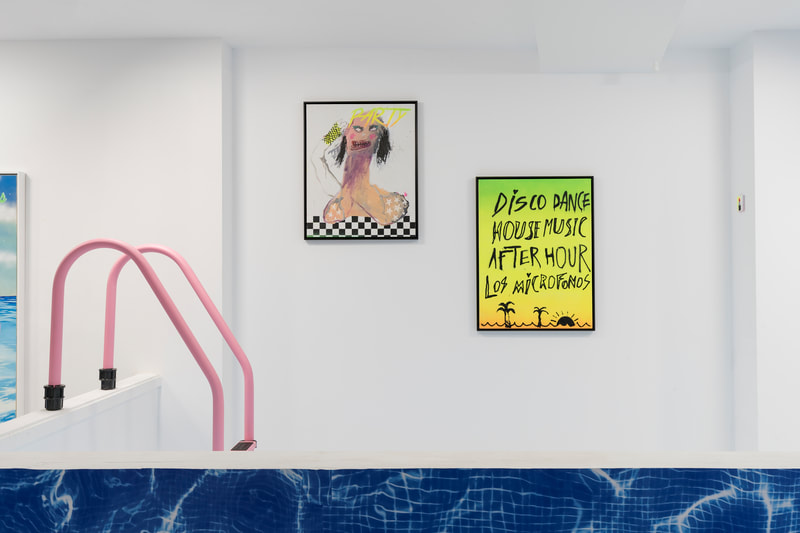 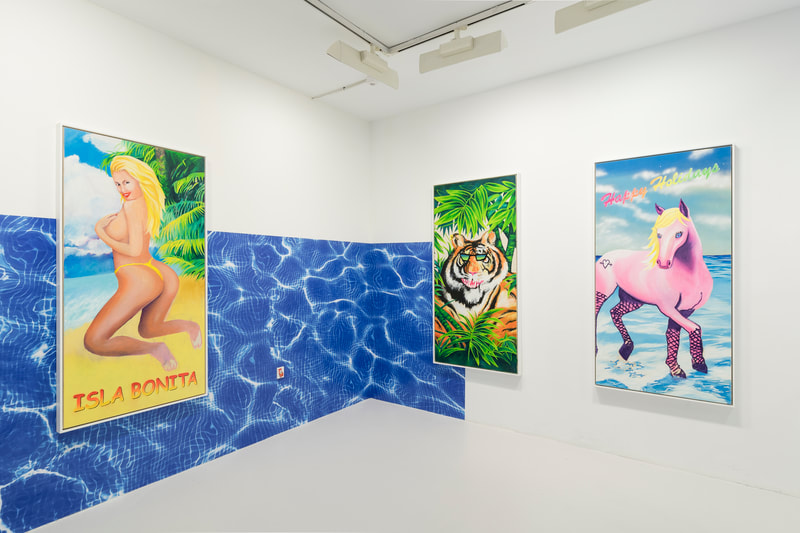 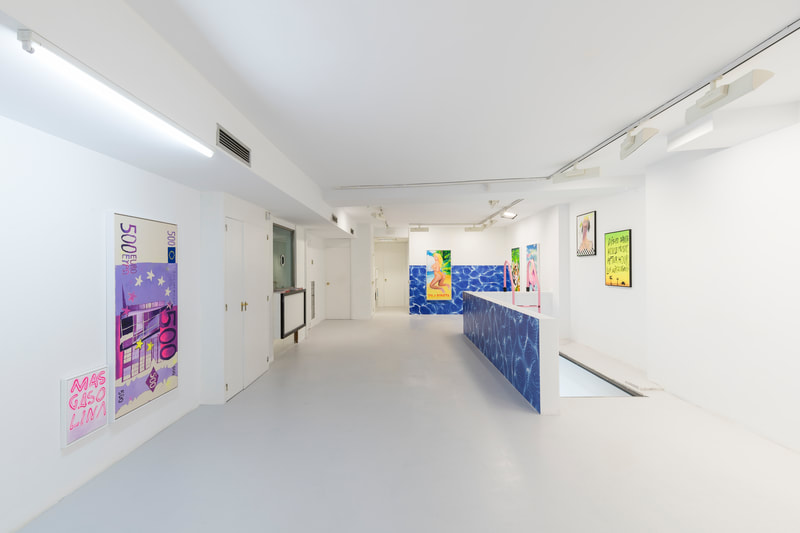 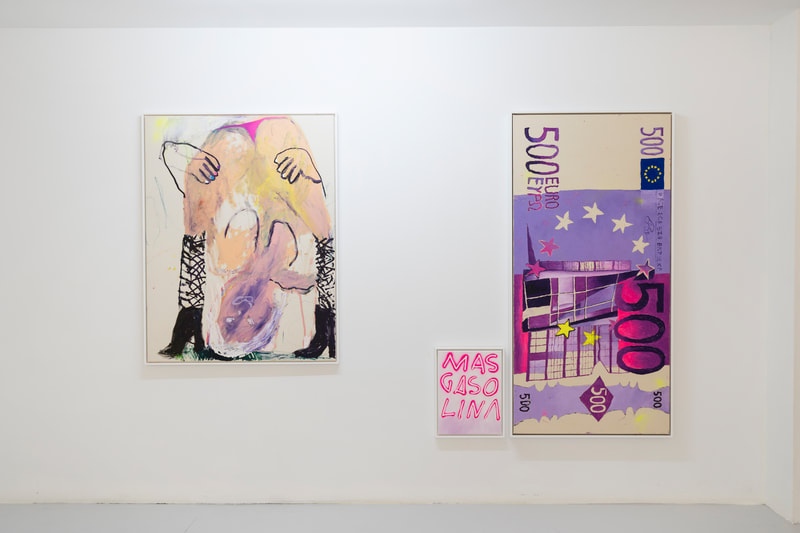 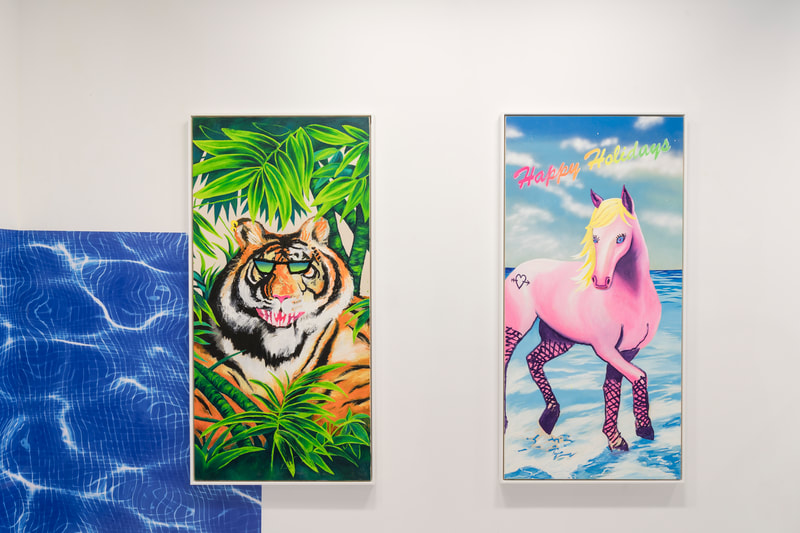 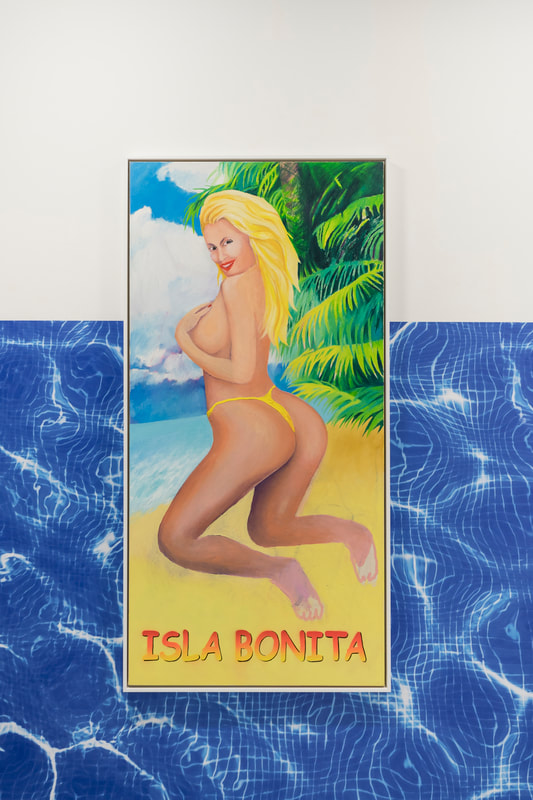 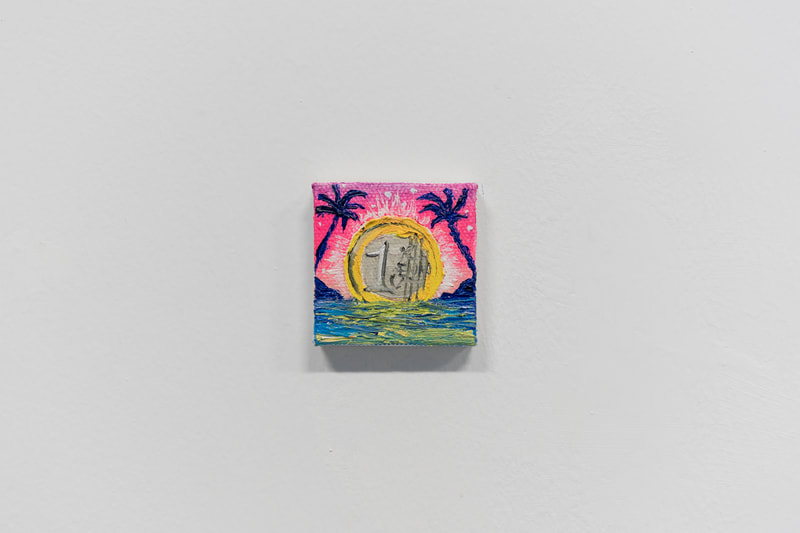 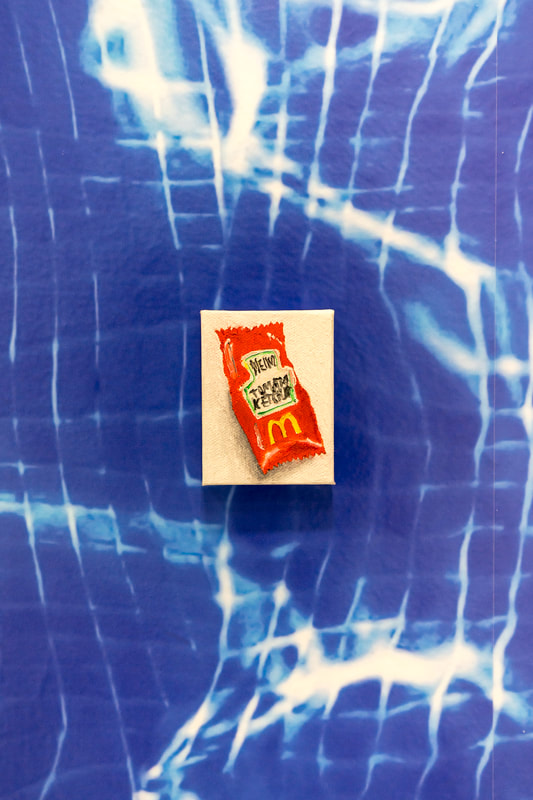 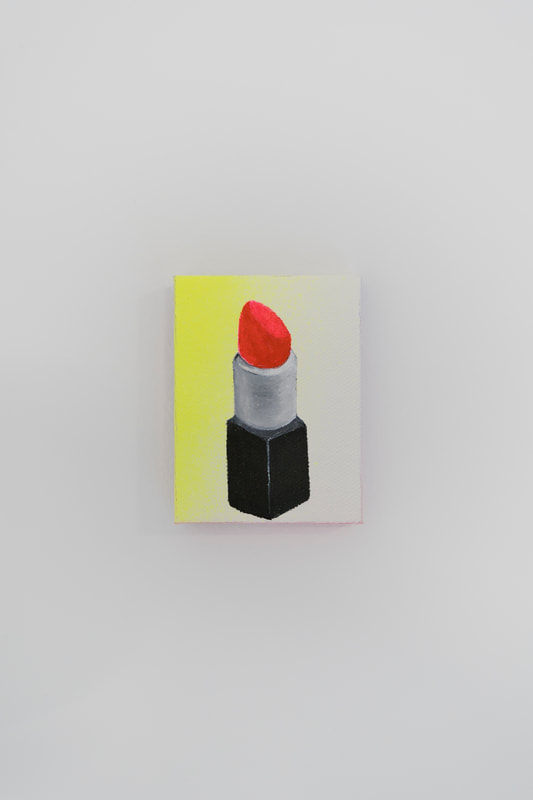 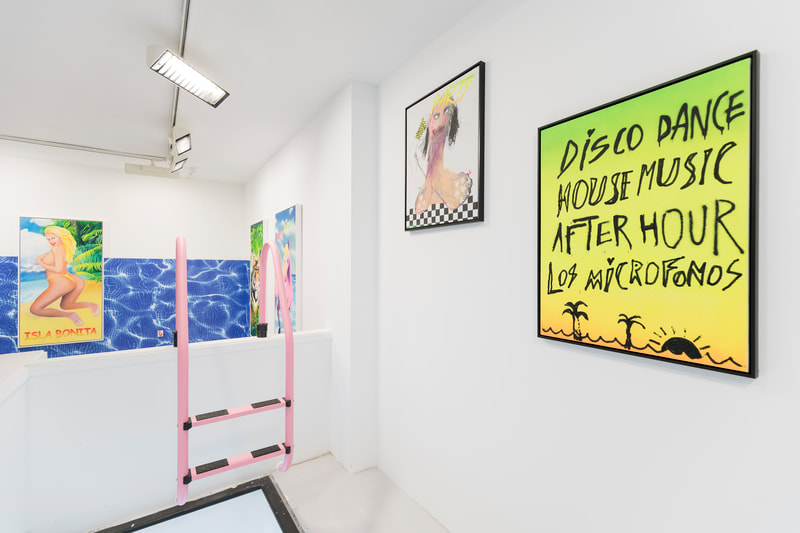 In her first individual exhibition at the Fran Reus gallery, the artist Bel Fullana (Mallorca, 1985) continues to show us her own universe that she carries as a flag and that wild attitude without intending it, simply, she is like that. The beautiful island in which she lives, is her source of inexhaustible inspiration, specifically, that kind of tourism that arrives and whose only goal is to have fun, without taking into account (in fact, they do not care or care) where they are and where that possibility of an island becomes the reality of a theme park. Unleashing his joie de vivre, a French expression that refers to the joy of living, the enjoyment and the exaltation of the spirit, without questioning or entering into moralizing judgments. Everyone can do with own life what we considers convenient and enjoy it, it is a valid option like any other.
Hordes of reddened bodies, delivered to the wildest hedonism, understood from a juvenile point of view and related to moments of holiday leisure, are thrown into the eager pursuit of party, alcohol and rampant sex at any time of day and night. So, Fullana doesn't judge, but filters and describes, always in a humorous and caricatured way, that particular type of low-end visitor, that white trash that we deny but at the same time venerate for being the source of a (supposed) economic prosperity, which become part during the summer season of the bizarre panorama of those specific environments in which the "anything goes" is the main motto.
"As a native, a spectator and a resident of Mallorca, I review the imaginary that fills the spaces inhabited by these newcomers to the island. His stay will take place in a kind of universe parallel to it, where everything is artificial and ephemeral and in which social relations are established with an expiration date" says Fullana.
On this occasion the artist unfolds in two, a kind of artistic bipolarity: on the one hand there is the classical (for known) and on the other, the artificial (because she does not recognize herself, but needs to be). The classic, call it Dr. Bel, makes the paintings to which we are usted to, with distorted environments, parodic abstractions, aggressive but unstable tracing, made, mostly with his left hand (without being left handed), unfolding in a shameless way and amoral. The other, call it Miss Fullana, makes a series of paintings much more realistic (we can speak of fullanesque realism), in this case, reproducing the typical towels of poor quality made in China, with random images, signed with the word Mallorca that we can find in any souvenir shop, as well as globalized food dishes, whose stock images can be used in any beach bar in the world, regardless of the final product served (expectation vs. reality) Palm trees? Tigers? Tropical fruits? Burgers? Dolphins? Sexy girls in top less? Pizza portions? Yes, everything and nothing at the same time. It also develops a series of paintings in mini format at real size of some of the typical objects that these visitors use: a lighter, an envelope of ketchup, a euro or a lipstick. No matter the context, only the experience that it provides. All a recurring list of clichés that mitify these environments being redundant and satirical, which have become the scene that welcomes the ethy and picturesque behavior of the passengers who occupy them.
"It is a description of the landscape that surrounds all this situation and that does not belong to the reality of the territory, but belongs to a larger reality, to the longing for revelry, sun and beach that is repeated in a multitude of places where have the optimal conditions to host a tourism of these common characteristics. No matter the point of the globe on which this site is located, all share a similar imagery, "says the artist.
All this (im) possible atmosphere, posed by the artist, is staged through a montage as an installation, recreating in a synthetic and artificial way a landscape place-no place, turning it at the same time into a kind of set inside another greater where the public itself acts as a tourist.