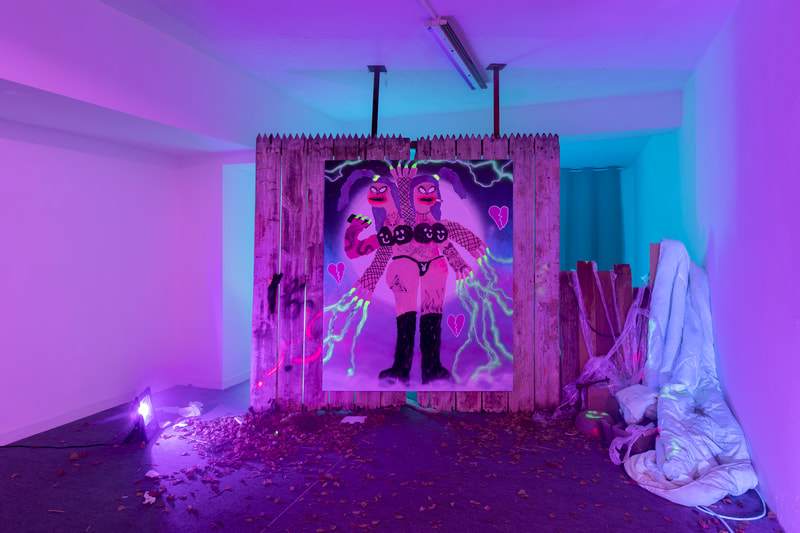 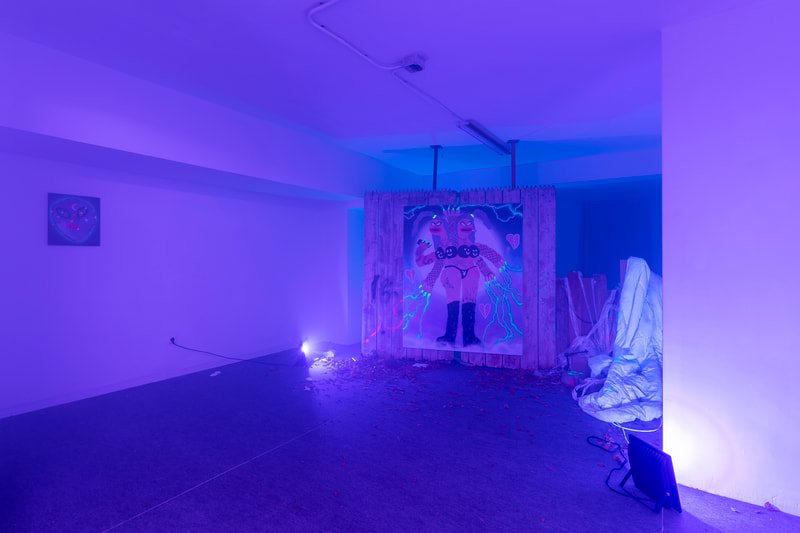 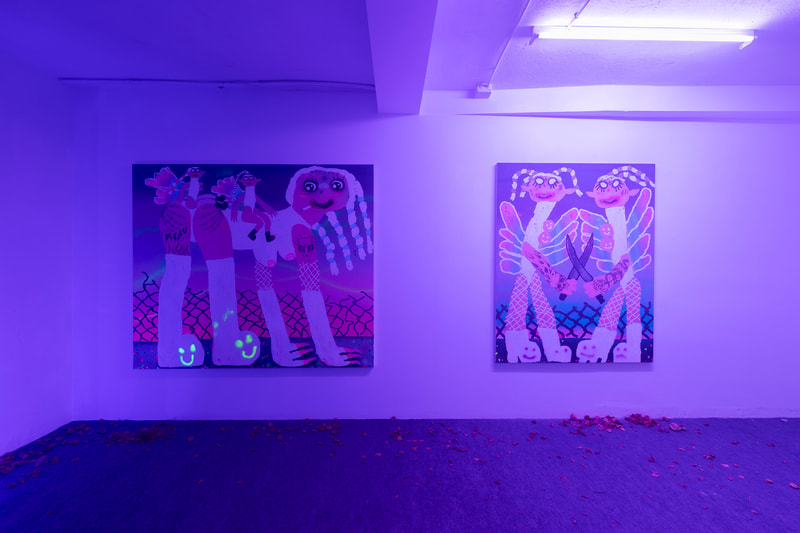 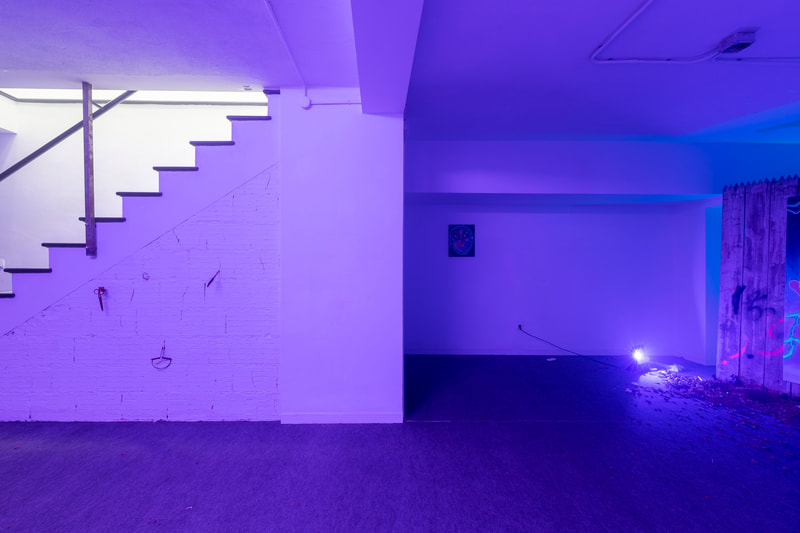 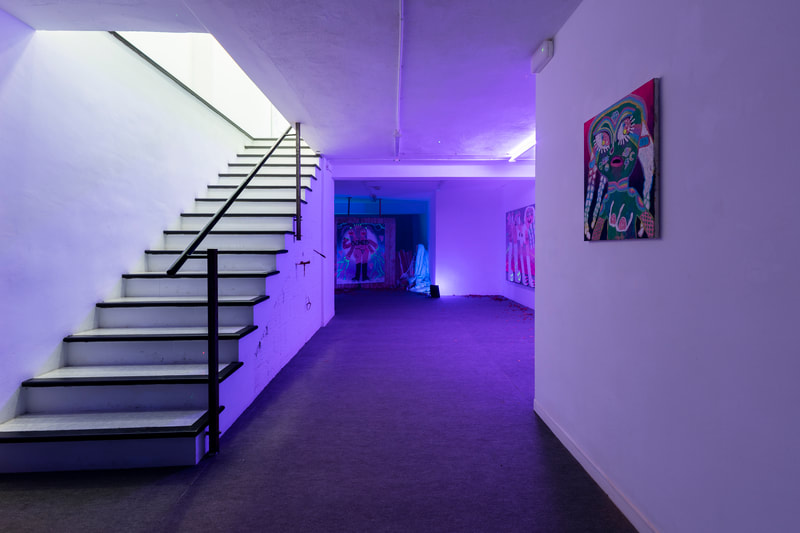 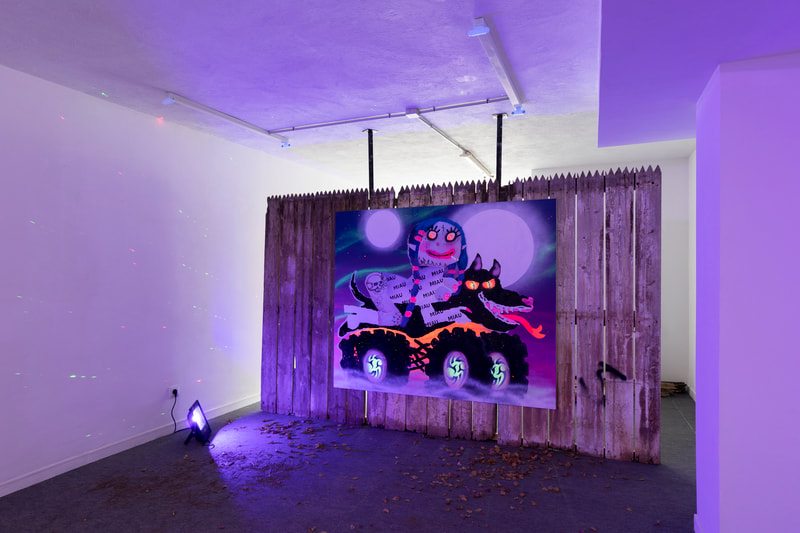 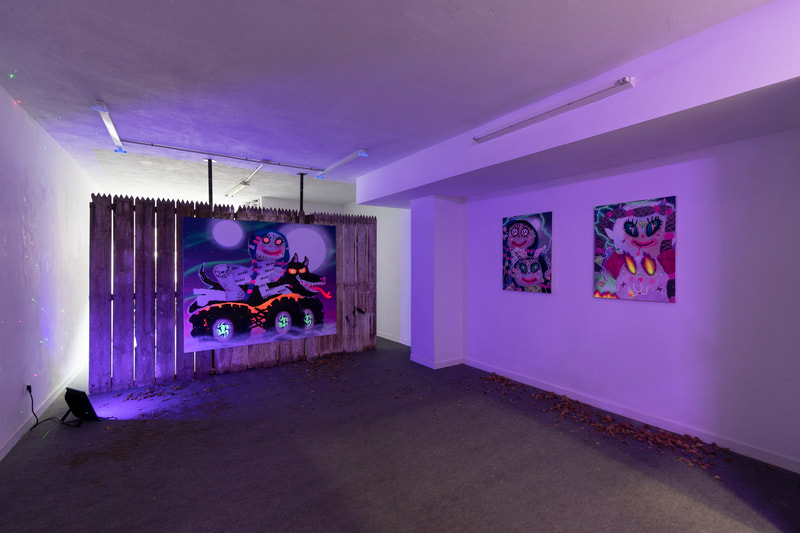 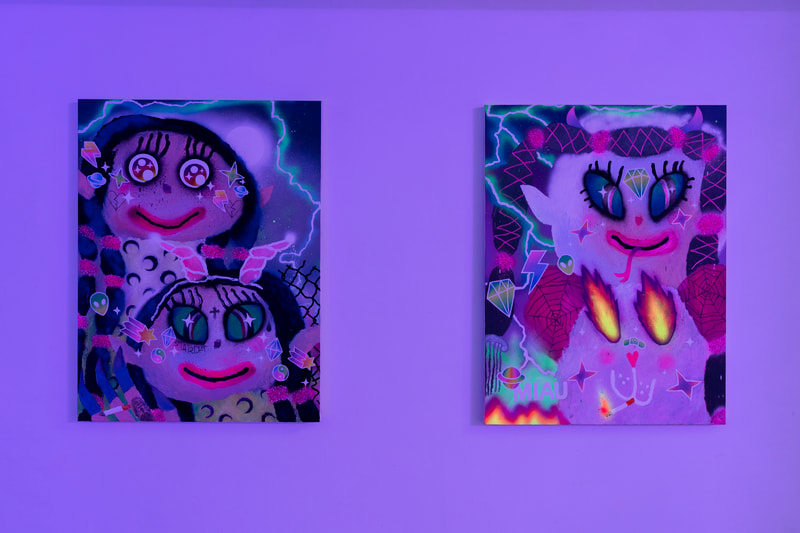 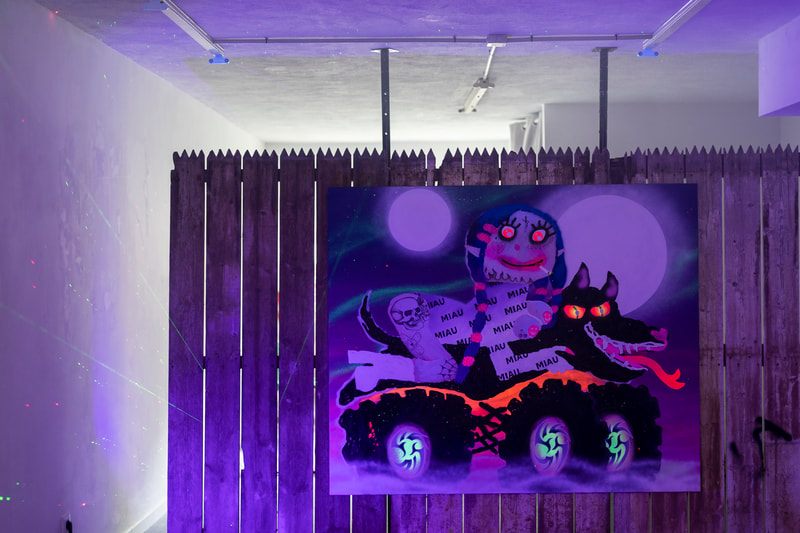 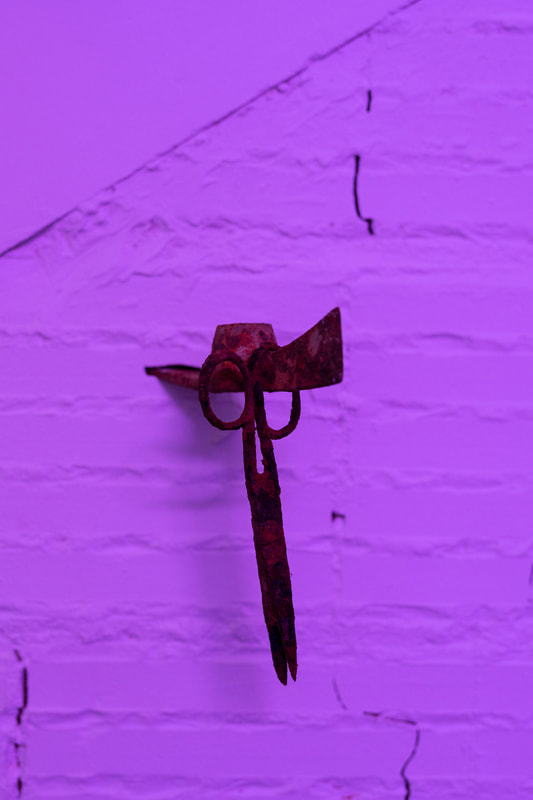 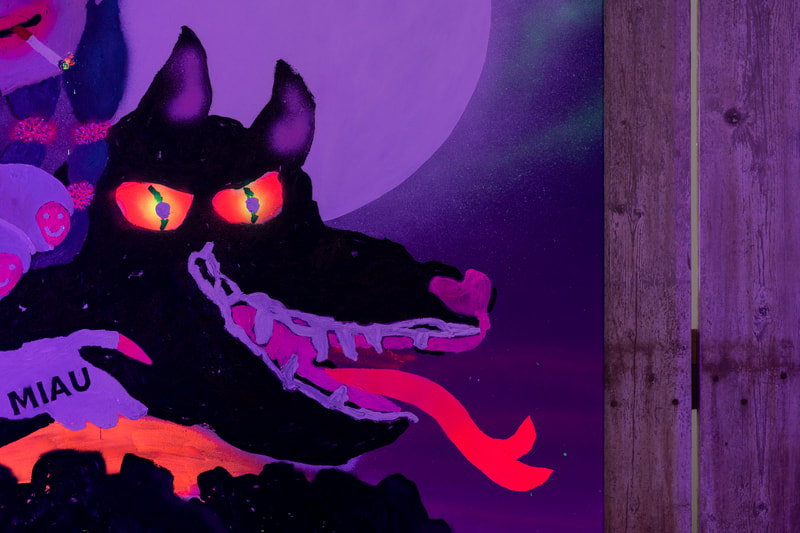 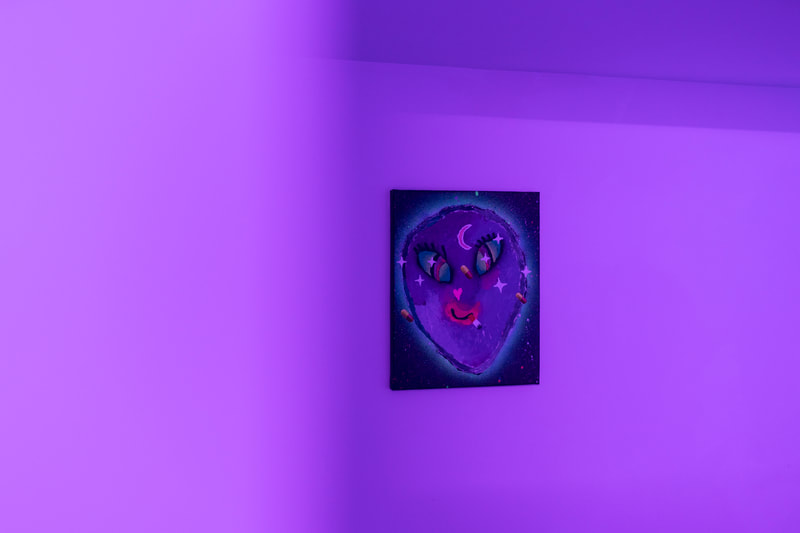 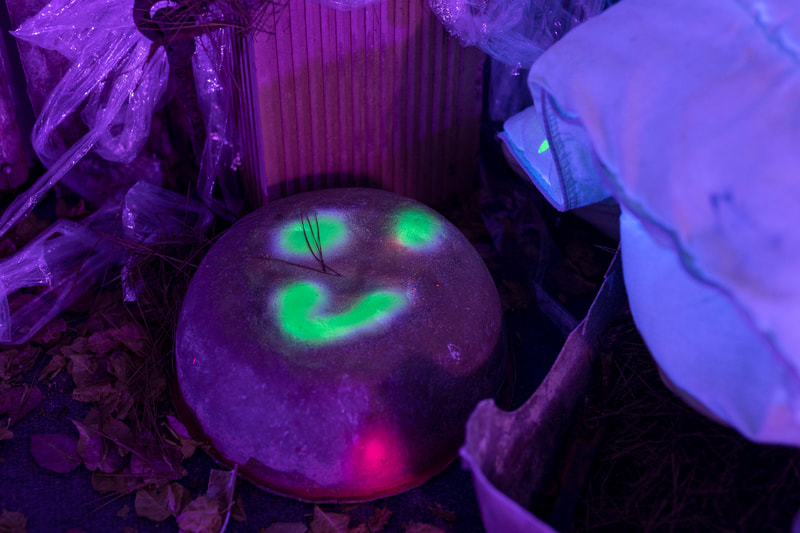 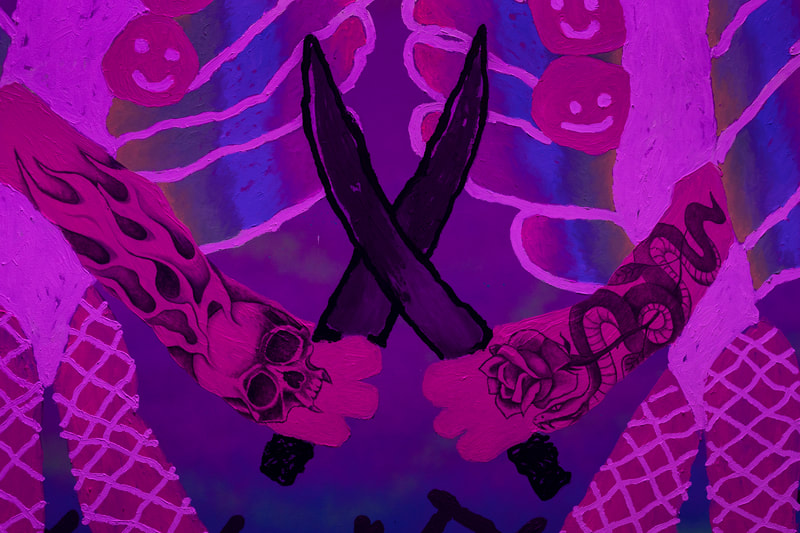 The second solo exhibition of Bel Fullana (Mallorca, 1985), at the Fran Reus gallery, takes as its starting point the improbable current location of the artist, a planet from which she fabulates, recreating her habitat, her experience of life and (self-)isolation in an ultra-rural environment that appears to her as a hypnotic-toroidal fantasy, presided over by the moon. Under this lunar influence, she unfolds his duality, constructing a pictorial study of the sensations that this environment transmits to him. The impression of being in the middle of nowhere makes the landscape the most ideal place for anything to happen. Thus, Fullana decides what is going to happen: to populate this place with dimensionless beings with whom she feels comfortable and of which she herself is a part. A forceful series of portraits that include Siamese twins with four breasts and five arms, an alienated alien, some ninja electro-goblins or herself on one of her dogs converted into a tractor. "After being locked up at home for so long, in the middle of the countryside and with the only company of my boyfriend, two dogs, a sheep, night noises and the moon, I have almost gone mad and I have recreated the friends I would like to have in a possible parallel reality", says the artist. A landscape typical of a horror film and strange phenomena, where, in the immensity of the night, extraterrestrial abductions, murders with implausible weapons, gratuitous rapes, wild sex, an improvised rave... took place. All of this was fuelled by the consumption of psychotropic substances. An explosive (re)mixture in which two parallel realities overlap indistinctly, losing the notion of being in one or the other, showing what could be but, in reality, is not. The ways of showing and telling the spectator are becoming more and more important for the artist (although they always were), conceiving this exhibition in a scenographic way, fleeing from the white cube that she hates so much, turning the exhibition room into a gloomy, tenebrous and very dark wasteland, an idealised recreation of this miau planet, incorporating real elements of her house, which are widespread around the ground (wood, rigging...), intervened, minimally, by her, presided over by a shed that must be accessed to see some of the pieces, forcing the visitor to interact actively, to enjoy the whole experience and fog, a lot of fog.